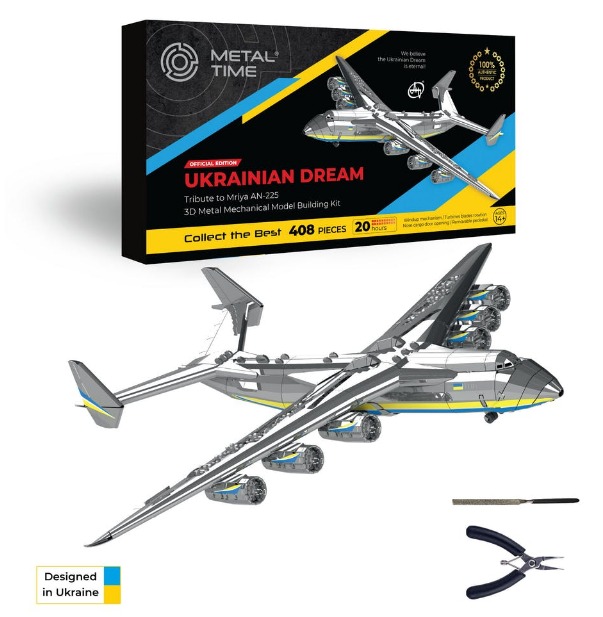 The world’s largest aircraft the Mriya, meaning ’Dream’ in Ukrainian, was constructed by Ukrainian aircraft-manufacturer Antonov in 1988. The AN-225 “Mriya” was a super-heavy transport aircraft designed to carry twice the load of a Boeing 747 freighter.  The massive 6-engine aircraft remained the flagship of the world aviation fleet for more than thirty years. With a wing-span nearly double the width of a football pitch, the AN-225 held several records, including heaviest aircraft ever built and largest wingspan of any aircraft in operational service. It quickly became a big attraction for aviation lovers and people from different countries thanks to its impressive takeoff and landings. However, the Mriya was destroyed during a Russian attack in February 2022.

Metal Time Workshop has created a tribute to the “Mriya” – a mechanical model called “Ukrainian Dream”. This unique building kit of the AN-225 aircraft is an officially licensed product and is produced under the relevant agreement with the state company Antonov, in partnership with the Ukrainian Postal Service. With each order, the chief pilot of Antonov Airlines, Dimitry Antonov himself, will personally sign the certificate of appreciation for you. Also as a sign of gratitude, each set will include the limited edition postage stamp “Ukrainian Dream”, which was issued by the Ukrainian postal service to support the comeback of the mighty “Mriya”. With this project, Metal Time Workshop will be supporting the restoration of the AN-225. The funds will also be used to aid in the training of new aircraft engineers and civil aviation pilots of Ukraine, and the restoration of the houses of Antonov workers destroyed by Russian troops as well as provide temporary housing for them.

Together with the launch of the Ukrainian Dream, Metal Time Workshop will also be launching the following unique mechanical building kits to support this project; Splashing Dreamer (Boeing 314 airplane), Remarkable Douglas DC-3 (Dakota airplane), AD Astra (deep space rocket), Stellar Raiders (UFO), Polar Steel (Magic Train Express), Voracious Harvester (Combine Agricultural Harvester), Grand Prix Falcon F1 (race car) and the Nimble Fighter (the Renault FT-17 tank). The “Ukrainian Dream” and other models being launched within this collection will give you unforgettable hours of technical creativity and will decorate your home, while making your dream of building legendary aircraft with your own hands come true. Each model will come with its own stylish lapel pin included in the gift box.

Oleksandr Shyrkov, founder of Metal Time Workshop, lived next door to the Antonov factory as a child and remembers the impressive sounds of the engines of the Mriya being tested. The day the aircraft was destroyed, Oleksandr decided to recreate the plane and keep its spirits alive. The engineering team of Metal Time Workshop meticulously worked on the design of the DIY mechanical model of the AN-225 and are seeking your support for the mass production of their unique building kits to begin. They will be launching their collection of mechanical building kits on August 24th, the Independence Day of Ukraine. The Metal Time Workshop invites you to be a part of the history of the reconstruction of the legendary aircraft. You can check out the Kickstarter campaign at https://www.kickstarter.com/projects/metal-time-workshop/ukrainian-dream